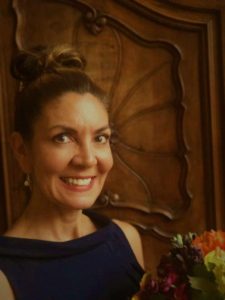 Irene Gavenas has been involved with training and fashion for over 30 years. She has been passionate about style all her life and decided to pursue her degree in Fashion Merchandising.  After college, she began modeling and also pursued sales and marketing. While Regional Training Director for Marriott, she discovered her passion for empowering others to maximize their full potential. Her students have always responded well to the way she teaches and her zest and bright outlook on life is contagious.

She has modeled for numerous stores and designers over her career. She was signed on by Ford Models, Chicago and since moving to Texas in 2004 has been modeling for charity events in the Metroplex. She’s appeared in television spots,  magazines, newspapers nationally and has been involved with fashion show productions working behind the scene.

She is very goal oriented. She believes in hard work and making an impact on others. She’s earned two black belts, one as a teenager and the second just in time to celebrate her 50th birthday.  She was determined to make the milestone of becoming a half centenarian an exciting, proud time versus a time that many adults dread. She is currently deciding on a new goal for turning 60 years old.

She is also excited to fulfill her dream of helping children gain confidence and knowledge by opening her own school of etiquette. She believes in empowering children with life skills that encourage them to make the right choices. She’s bringing a fresh and modern perspective to the industry by creating a non-intimidating environment where children get excited about learning etiquette. Ms. Gavenas offers innovative and empowering courses through Poised For Life School of Etiquette.

Ms. Gavenas was born in Montreal, Canada and grew up speaking French. She recently celebrated her 33rd year wedding anniversary with her husband Jeff and has two children.  Alex, age 14 and Gisele, age 17.